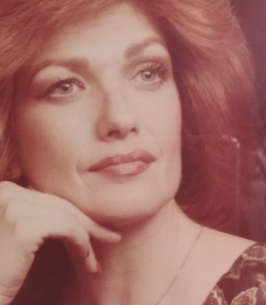 Funeral services for Martha Frances (McDonald) Bowden, 76, of Morgan, TX will be conducted at 2:00 P.M., Friday, October 25, 2019 in the Rosser Funeral Home Chapel. Interment will follow in Kimball Bend Cemetery, Hwy 174, Kopperl, Texas. A visitation will be held from 6-8:00 P.M., Thursday, October 24, 2019 at Rosser Funeral Home.
Martha Frances McDonald Bowden passed into the arms of her Lord and Savior on Sunday, October 20, 2019. Her loving husband, Kenney and adoring daughter, Aaliyah held her hand and walked her to the door of eternity.
She was the eldest child born to Samuel Dewitt McDonald and Alleen (Dickey) McDonald on July 13, 1943. As a child, Martha traveled from Weatherford and Fort Worth to Espanola, New Mexico but returned to Haltom City, Texas to graduate from Haltom City High in 1961.
Ms. Martha was an amazing painter and participated with the “Starving Artist” association. She was known for her “photo to art” transition paintings as well as her passion for cooking.
The joy of fishing bound Martha to the love of her life, Kenney Bowden. They became true soul mates on December 28, 1984 in Durant, OK.
She was preceded in death by her parents; son, Stephen Bowden; daughter, Brenda Blackerby; sister, Sammie Herman; and a nephew, Mack England.
Martha is survived by her adoring husband, Kenney Bowden; son, James Dewitt Self and wife Carol; daughters, Aaliyah Bowden and Susan Webster; siblings, Mary Marlow, Debbie Brand and husband, Herbert, and Pam Mclaren and husband, Randy; grandchildren, Kayla, Cullen, Ashlie, Crystal, Stephanie; eight great grandchildren; six nieces and nephews; as well as numerous extended family and friends.

To order memorial trees or send flowers to the family in memory of Martha Frances Bowden (McDonald), please visit our flower store.