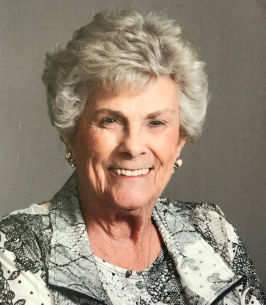 Rebecca Susanne (Sue) Hall was born in Sistersville, West Virginia on November 5, 1932, to Clyde Hampton Hall and Mary Virginia (McCamey) Hall. She grew up in Longview, Texas, and attended school at Ward-Belmont followed by Southern Methodist University, where she was a member of the Kappa Alpha Theta sorority and was honored as an SMU Beauty.

In 1950, Sue agreed to go on a blind date in place of her roommate who had fallen ill. She had previously sworn off dating Texas Aggies after a few disasters and never imagined that her date that night would end up being the love of her life, Robert Truett (Bob) Childress, Jr. They were married on January 23, 1954, at First Methodist Church in Longview. After graduation from SMU, Sue worked as a teacher for several years and eventually transitioned to life as a homemaker with the birth of her three children, Becky, Cindy, and Robert.

In 1958, Bob and Sue moved to Cleburne, Texas, where they would raise their family, form wonderful lasting friendships, and become involved with the community. Sue was a past-President of the Heritage Assembly of Cleburne, a member of the Kings Daughters Watch and Work Circle, and a member of the Cleburne Moneymakers investment club. She also served on several committees at St. Mark United Methodist Church and absolutely loved volunteering at the Breadbasket Food Pantry at St. Mark. She was a skilled bridge player (although she wouldn’t admit it) and thoroughly enjoyed the company of her bridge groups.

While she was an SMU Mustang by degree, Sue bled maroon with the rest of her family. Bob and Sue were long-time supporters of Texas A&M University where they endowed both academic and athletic scholarships, were members of the Legacy Society, and met some of their very closest friends on trips around the world with the Traveling Aggies.

Sue loved reading, gardening, cooking, bird watching, traveling, church, spending time on her porch, and she NEVER wanted to miss out on a party. A party to Sue meant anywhere there was going to be visiting and fellowship. She wasn’t afraid to laugh at herself and she was such a source of joy for everyone who was lucky enough to know her. She lived a wonderful life and she will be greatly missed.

To order memorial trees or send flowers to the family in memory of Sue Childress, please visit our flower store.