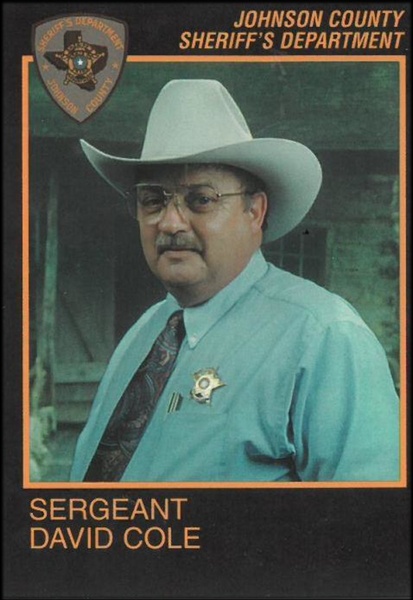 Memorial services celebrating the life of David Glenn Cole, 76, of Cleburne, Texas will be conducted at 10 a.m. Saturday, July 7, 2018 in the Rosser Funeral Home Chapel. The Rev. Jack Hunnicutt and the Rev. Bob Phillips will officiate.
David passed away Monday, June 25, 2018 in Cleburne, Texas. He was born in Tyler Texas on June 2, 1942, the son of Maurice and Alice (Rhodes) Cole.
Raised in Abilene and Midland, Texas, David graduated from Midland High School and attended Sul Ross University in Alpine, Texas.
Having served over 40 years “serving and protecting” in the law enforcement community throughout Texas, he began his law enforcement career in 1963 as a Patrolman in Midland. He served as Regional Director of Criminal Investigations and with the Office of Inspector General, a state agency. David was a Sgt. with the Johnson County Sheriff’s office for 19 years before his retirement in 2005. After retirement, he continued to work cold case files with fellow colleagues for the Johnson County Sheriff’s Department. David was a life member of Homicide Investigators of Texas and was a member of the First United Presbyterian Church in Cleburne, Texas.
He was preceded in death by his parents.
David is survived by his son, Richard Cole and wife, Becky, of Azle, Texas; daughters, Deborah (Cole) Smith and husband, Duston, of Granbury, Texas and Rebekah (Cole) Tijerina and husband, Louie, of McAllen, Texas; and seven grandchildren, Jennifer Ray, Meagan Lopez, O.J. Lopez, Hayden Cole, Samantha Tijerina, Dalton Cole and Bubba Tijerina.

To order memorial trees or send flowers to the family in memory of David Cole, please visit our flower store.