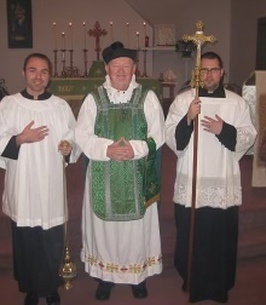 A funeral mass for Father John Cornelius, 72, of Alvarado, Texas will be conducted at 11:00 A.M., Monday, September 13, 2021 at St. Joseph Catholic Church in Cleburne. Father Christopher Stainbrook and Father Scott Wooten will officiate.
Father John Cornelius passed away Wednesday, September 8, 2021 in Mansfield. He was born December 30, 1948 in Olean, New York to Betty Jane (Young) and Milford C. Cornelius. He married Sharyl Martzolf on November 17, 1979 in Lancaster, New York.
Father John served his country in the United States Navy and became an ordained Priest of the Catholic Church. He most recently served at St. John Vianney in Cleburne. He was preceded in death by his parents.
Survivors include his beloved wife, Sharyl Cornelius of Alvarado; daughters, Virginia Cornelius of Glen Falls, New York, Sarah Jane Cornelius and Rebecca A. Meier and husband, Justin, all of Alvarado; two grandsons, Owen and Nolan Meier; and a host of other relatives and dear friends.

In lieu of flowers, the family requests donations be made to the Cleburne Pregnancy Center.
To order memorial trees or send flowers to the family in memory of Father John Dale Cornelius, please visit our flower store.