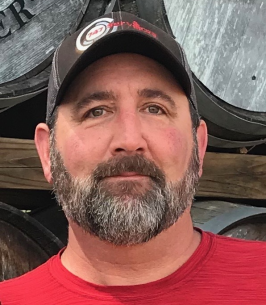 Todd Colster Dolan passed away at his home in Godley, Texas surrounded by family on the afternoon of Friday, January 15, 2021 after a 19 month hard fought battle against cancer.
Todd was born to Cheryl Kay (Colster) Reynolds and Jerry Dolan on June 19, 1973 in Warrensburg, Missouri. He was raised in the small community of Centerview, Missouri.
On May 20, 1995 he married Laura Mlika. Not long after, they had two beautiful daughters, Kiersten and Gracie. He lived his whole life doing everything for his girls.
Todd, from a young age, loved to work outdoors and fell in love with running heavy machinery. This served him well for many years as an operator. He was a proud member of the International Union of Operating Engineers Local 101.
Todd eventually went on to own his own company with his father d/b/a Dolan Construction. Laura and the girls moved many times to several states to further his career until they landed in Texas in 2009. That is where he began his career as an independent consultant in the oil and gas industry.
Once in Texas, he created his infamous brand, honoring his father. The 747 Services LLC logo is worn proudly by many today. Todd quickly became well known and respected by all who knew him in the industry by being a wonderful mentor, as well as an all around honest and hard working man.
He could fix anything from plumbing to electrical and was always finding something that needed fixing around the house. Todd enjoyed cheering his daughters on in all their sports and endeavors in life. He loved hunting with his family and friends, cheering for his Chiefs and his Royals, watching his NASCAR, and spending time with those he loved. Not only was Todd a devoted husband and father, he was a wonderful; son, brother, grandson, son-in-law, brother-in-law, uncle, cousin, nephew and most importantly a friend.
Todd is survived by his wife, Laura; daughters, Kiersten and Gracie, all of the home; mother, Cheryl “Kay” Reynolds of Warrensburg, Missouri; brother, Kevin Dolan and wife Jennifer and their family,of Warrensburg, Missouri; mother and father-in- law, Russel and Sharon Mlika of Bethany, Missouri; sister-in- law, Corinna Mulnix and husband, Allan, of Bethany, Missouri; brother-in-law, Randy Mlika of Kansas City, Missouri; nephew, Matthew Mulnix of Lawrence, Kansas; niece, Allison Mulnix of Kansas City, Missouri; and many cousin, aunts, uncles and special friends.
Todd was preceded in death by his father, Jerry Lee Dolan and step-father, Jack Reynolds, as well as, many dearly loved grandparents, aunts and uncles.
Visitation will be held from 5:30 – 8 p.m. Wednesday, January 20, 2021 at Rosser Funeral Home in Cleburne, Texas.
There will also be a Celebration of Life on Friday, January 22nd at DelNorte Tacos Mesquite Room starting at 6:30.
Graveside services are pending at Memorial Gardens in Warrensburg, Missouri.
In lieu of flowers, there is a DOLAN FAMILY BENEFIT account set up for the family at ASC bank in Godley.
To order memorial trees or send flowers to the family in memory of Todd Colster Dolan, please visit our flower store.