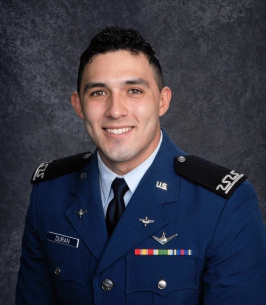 It is with our deepest sorrow that we inform you of the funeral services for US Air Force Cadet Nick Ryan Duran.

Services will be held at the KEENE SPANISH SEVENTH-DAY ADVENTIST CHURCH, 304 US-67, Keene, TX 76059.
keenehsda.org.

The Committal Service at DFW National Cemetery: 9:30 A.M. Saturday, July 3, 2021 with the funeral procession departing from the Keene Spanish SDA Church at 8:00 A.M.

U.S. Air Force Academy Cadet Nick Ryan Duran, 20, was piloting a single-engine aircraft when it went down near the Cleburne Regional Airport in Texas on June 24, 2021. He died in the plane crash.
Nick was born at Huguley Hospital in Fort Worth, TX on July 18, 2000. Even as a baby, his dimpled smile charmed his large circle of family and friends. His family still chuckles when they remember Nick as a little boy putting on his Adventurer uniform, puffing up his chest, setting his sights straight ahead, and leading the club carrying a flag that was at least twice his size. He was an active member of his church, and even as a child would be found perched on a tall stool during many church services, manning the cameras and focusing through the lens. Nick was grounded in his faith, and in 2013 chose to be baptized and commissioned for God’s service.
Nick was an exceptional student, graduating from Cleburne High School in 2018 as one of the top ten students in the class. He was a member of the National Honor Society and the Beta Club, and President of the Spanish Club. Nick received numerous academic recognitions and leadership awards. However, he probably was most thrilled when he won 1st place at the Irving Elementary School Talent Show where he played his guitar and sang “Lord, I Lift Your Name On High”.
Nick loved wearing uniforms, just like his police officer dad. He began playing ball with the Cleburne Recreational Leagues when he was four years old, and as a youth was selected to play on a USSSA All American Team. That was an inspiring experience for the young ball player. He embraced the opportunity to travel with Team TX to Italy to participate in a World Tournament. He played his beloved baseball with numerous teams, and wore the Cleburne High School Yellow Jackets’ baseball uniform for four years. With his trademark determination, intense focus, perseverance, and faith, Nick continued to develop his skills at the TCS Post Grad Academy, and in 2019 was recruited to play baseball at his dream school, the United States Air Force Academy in Colorado Springs.
At USAFA, Nick was a proud member of Cadet Squadron 29, the Black Panthers. He completed the Soaring Program and flew solo in a glider. As a Cadet, Nick was in charge of the Aviation Club and focused on providing access to Cadets interested in pursuing aviation. Recently, he worked at Basic Military Training (BMT) Lead in San Antonio, TX, where he led a Flight of brand new US Air Force Airmen during their basic training. Nick’s ultimate goal was to become an Air Force Fighter Pilot.
Nick is survived by his parents Joselito and Linette Duran, his sister Ashley Nicolle, brother Kevin Jose, great grandmother Abuela Iris, maternal grandparents Norberto and Lucy Rivera, paternal grandparents Jose Duran and Amelia Ruperto, and many aunts, uncles, cousins, and cherished family friends.
If Nick had had the opportunity to share any parting words, surely they would have included his favorite Bible verse, Joshua 1:9. Be strong and courageous. Do not be afraid; do not be discouraged, for the Lord your God will be with you wherever you go.
To order memorial trees or send flowers to the family in memory of Nick Ryan Duran, US Air Force Academy Cadet, please visit our flower store.