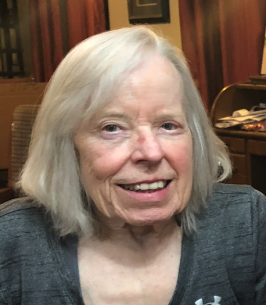 Graveside services for Lynette Coleman Edwards, 79, of Keene, Texas will be conducted at 11:30 A.M., Saturday, July 24, 2021 in the Burns Cemetery in Fannin County, Texas. Reverend Douglas Peebles will officiate. Visitation for family and friends will be held from 6-7:30 P.M., Friday, July 23, 2021 at Rosser Funeral Home in Cleburne.
Lynette Coleman was born April 8, 1942 in Desert Texas. The only child of proud parents, Johnnie Mardell and Lenwood Coleman.
She was raised in Trenton, Texas. Lenwood was Deacon of First Baptist Church in Trenton, and they were very family oriented with a large family of grandparents, cousins, aunts, and uncles in the area.
She graduated from Trenton High School and started her long career in banking at First National Bank of Trenton, where she still has an account today! She had been at the same Bank in McKinney since 1975, and retired from Banking in 2009, when her mother passed away and she had to take care of her Estate.
She Married Steven Lokey Edwards of Whitewright on January 22, 1965. Steve Jr. was born September 4, 1965, also an only child. As she raised “Little Stevie”, she remained active in the Church and very Family Oriented, spending many weekends with family in Trenton, Anna, and Whitewright.
Despite only one actual child, she became Mom, Maw Maw, Mrs. Ed to countless others who loved her and cherished her. She genuinely loved all of Steve’s friends and always made sure they had plenty to snack on when they were over. She was the original Uber, taking the kids wherever they needed to go.
She loved Sports and never missed an event. She was an avid Cowboys, Mavericks and Ranger Fan to the end.
She was very active in the raising of her Grandchildren, Trey and Tayler, going on many family vacations when they were young. She always asked how they were doing, right up to the day she left this world, July 18, 2021.
Lynette was preceded in death by her Parents- Lenwood on December 3, 2006, and Johnnie on June 13, 2009.
She is survived by: Husband, Steve Edwards of Rio Vista, Son Steve, Daughter in Law, Janice, grandchildren Trey, and Tayler Edwards of Rio Vista.
She still has loving family in Forney, Plano, Anna, and Sherman. As well as her long-time neighbors in Allen, where she lived from 1975 to 2019.

To order memorial trees or send flowers to the family in memory of Lynette Edwards (Coleman), please visit our flower store.