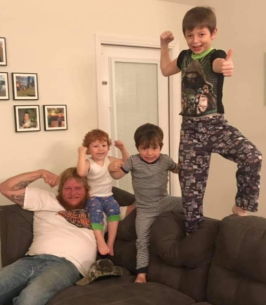 A memorial service for Christopher Earl Elliott will be held from 6 – 8 p.m. Tuesday, December 22, 2020 in the Rosser Funeral Home Chapel. Daniel Pearson will officiate.
Christopher Earl passed away at the age of 41. He was a proclaimed resident of Fort Walton Beach, FL. He left this world on Tuesday, December 8, 2020 in Navarre, FL.
Chris Earl was born in Cleburne, TX on April 30, 1979 to Earl Dee and Pamela Ruth (Cooper) Elliott. He lived and called Fort Worth, TX his home until moving to Florida in 2001. He loved being from Texas, but his heart was in Florida. Once he started fishing off the Shalimar Bridge, at that point he felt true joy. Not only could you not compare fishing in Florida to fishing in Texas, he had three great loves, Teisha, Isabel, and 5 children. He loved them very much. He would try to move home, but always came back. In addition to fishing, Chris was a fan of music. He listened to all kinds of music but loved rock and country most of all. But no matter what, he found a way to make the KISS sticking out his tongue pose. Chris had a big heart. When it came to giving a helping hand to a neighbor, he was there. He tried as hard as he could to be there for anyone. Chris loved to be the life of the party. He was always loud and joking around. He could always find a way to make you smile.
Chris Earl was preceded in death by his son, Jason Griggs and Jason’s mother, Teshia Gautreaux.
Chris Earl is survived by his daughter, Faith Griggs Etheridge (Ryan); sons, Wyatt, Earl, Clayton, and their mother, Isabel Mehaffy; parents, Earl and Pamela Elliott; sister, Jennifer Elliott; brother, Scott Elliott (Diane); nephews, Nicholas Fischer, Bobby, Shawn, and Grayson Elliott; nieces, Jaiden Ensinia, Tiffany Elliott, and Juliana Ensinia; brother-in-law, Clifton “Bud” Gautreaux (Tina); grandchildren, Hayden, Holden, and Hunter; and numerous aunts, uncles, cousins, and friends.

Rosser Funeral Home does not have an onsite florist, for floral tributes; please contact a local florist for delivery.
To order memorial trees or send flowers to the family in memory of Chris Earl Elliot, please visit our flower store.