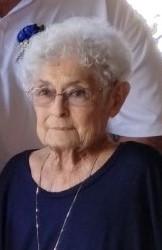 Flora Rae Ables Lippoldt passed away Monday, January 2, 2023 in Cleburne, Texas. She was born June 15, 1937 in Oklahoma City, Oklahoma to Flora Belle (Hamilton) and Cecil Crawford. Flora worked as a veterinarian assistant for 13 years and then owned and operated Ables BBQ restaurant. After moving to Texas she worked as a medical assistant until retiring.

To order memorial trees or send flowers to the family in memory of Flora Ables, please visit our flower store.