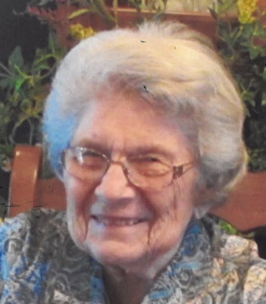 Rosalie Annie Fuchs Griffin passed away Tuesday, January 12, 2021 in Cleburne, Texas. She was born in Waco, Texas on January 7, 1927, to John Phillip Fuchs and Alma Enbrock Fuchs.
Rosie married Charles James Griffin on August 5, 1945. James’s three sisters decided she would be their sister-in-law as soon as he returned as a prisoner of war; he returned in June, and they were married in August. They were together for 52 ½ years.
Rosie was a beautiful and devoted wife, daughter, sister, sister-in-law, a treasured aunt, friend, and faithful servant of Jesus Christ. She worked a variety of jobs in Waco, until her retirement.
After that, Rosie became a dedicated volunteer for Saint Mary’s Catholic Church, Ladies of Charity, RSVP (a retired senior volunteer program), and Charitas. She was a district officer and very active in the XPOWs.
She enjoyed sewing, knitting, crocheting, ceramics, crafting, solitaire, and working word puzzles (especially word searches). The most special times were spent with family and friends for holidays, celebrations, parades, festivals, and get-togethers. Rosie had lived in Waco all her life and in her loved home for over 70 years before moving to Cleburne, Texas in December of 2018, to be near her nieces.
She was preceded in death by her beloved husband; her parents; brothers, Johnny Fuchs, Jr. and Edward Paul Fuchs; and sister, Francis Marie Ewing.
She is survived by nieces, Carolyn Cody, Judy Graves, Jane Gardner, Pam Burnes, Donna Brown, Sue Ann Fox, Linda Carmichael, and Patsy Wiederkehr; and nephews, Ronnie Ewing, Bill Watts, Jr., and Rick Simmons.

Services will be held at 11 a.m., Monday, January 18, 2021 at Saint Mary’s Catholic Church, 1401Washington Ave., Waco, Texas. Visitation and viewing will be at 10 a.m. in the church foyer prior to the Rosary and Mass. Interment will follow at Waco Memorial Park immediately following the services.

Rosser Funeral Home does not have an onsite florist, for floral tributes; please contact a local florist for delivery.
To order memorial trees or send flowers to the family in memory of Rosalie Annie "Rosie" Griffin (Fuchs), please visit our flower store.