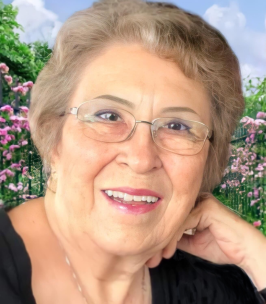 Leda Mae Hamilton, age 87, entered the gates of Heaven on August 29, 2021. She was born August 18, 1934, in Overton, Texas, to Ennis Butler and Dora Mae Morgan. She is survived by her husband of 68 years, Albert; children Steve Hamilton; Donna Gordon and spouse, Tom; brother, Ken Morgan; her only grandchild, Cody Hamilton; her great-grandchild, Harley Hamilton; and a bountiful blessing of nieces and nephews. She was preceded in death by her sister, Vicki Jo McGlothlin.

After graduation from Southwestern Junior College Academy in 1952, she proceeded on to Southwestern Junior College where she enrolled in secretarial studies and became proficient in typing and shorthand. During this time she met her best friend and love of her life, Albert Hamilton. They married on June 21, 1953 in Keene, Texas, at her parents new built home. In fact, flooring was still be laid the week of the wedding!

After their marriage, life's journey took them both to various opportunities including Tennessee, Nebraska, Iowa, Colorado, Washington, back to Tennessee and then finally home to Texas, where she has resided since 1969. During these travels she worked as a housewife and mom, at a State hospital as a nurse aide, the Registrar of Oak Park Academy, as Assistant to the Registrar at Campion Academy, in the hardware department of Harris Pine Mills, and retired from the State of Texas after 10 years of service.

On November 5, 1954, they welcomed their first-born, Steven Christopher Hamilton, while living in Chattanooga, Tennessee. She was proud to be a new mother and always made sure that her work was scheduled so that she could always be home when her children were out of school in the afternoons. On September 8, 1965 their daughter, Donna Sue, who was selected and not expected, was born. The hustle and bustle of daily living with two children was her delight.

Leda was passionate about the great outdoors and she and Al traveled all over the United States exploring, camping, and hiking through nature. She had an eagle eye that was usually the first to spot the wildlife and could identify birds by their calls. Her favorite view was anything from a mountain top! Retirement included living full-time in a 5th-wheel and traveling once again all over the United States. Life after the 5th-wheel adventures included travel to Cozumel, Honduras, Belize, Spain, Italy, France, and Croatia. Her dream come true was a three month travel with Al and her brother in his 36-foot motor-home all over Alaska. She experienced scenery, wildlife and nature on a scale like never before. Scrolling thru her camera will reveal photos of moose, grizzly bear, caribou, big horned sheep, salmon, halibut, and rainbow trout as well as flowers, trees, and mountains.

A memorial service will be announced at a later date. The family wishes to thank those who have called, texted, and stopped by. We are so thankful for your friendship and concern shown to us. We all look forward to the day the Lord himself shall descend from heaven with a shout, with the voice of the archangel, and the trump of God to meet Him and spend our eternity where there shall never be any more tears or suffering.

To order memorial trees or send flowers to the family in memory of Leda Mae Hamilton (Morgan), please visit our flower store.