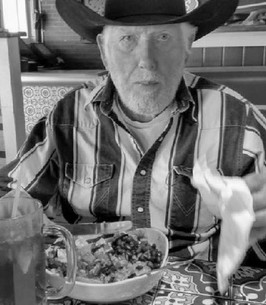 A memorial service for Daniel Lester Howard, III, 81, of Covington, Texas will be conducted at 11 a.m. Wednesday, January 2, 2019 in the Rosser Funeral Home Chapel with the Rev. Brian McClure officiating.
Mr. Howard passed away Thursday, December 13, 2018 in Itasca, Texas. He was born in Texas on March 17, 1937, the son of Eunice and Daniel Lester Howard II.
Mr. Howard served in the United States Army and was retired from the Union Pacific Railroad
He always liked to be outside working on projects and loved working with horses. He was a very wise man and had a good skill at teaching the things he knew.
He had a good number of friends, would help anyone he could and will be missed by his family and friends.
Mr. Howard was preceded in death by his parents, Eunice Sloan and Daniel Howard II; and sister, Eltha Anderson.
He is survived by his son, Daniel Howard IV; daughters, Sherry Chastain and Pam McCluskey; brothers, Larry Howard and Lealand Howard; sister, Danamay Worsham; three grandchildren and six great grandchildren.
To order memorial trees or send flowers to the family in memory of Daniel Lester Howard III, please visit our flower store.