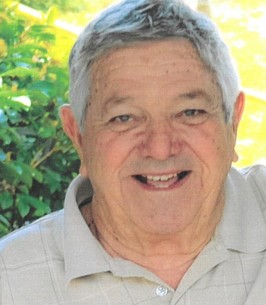 Garland Thomas Hunt, 84, of Cleburne, Texas, passed away Friday, February 21, 2020, in Fort Worth, Texas. He was born January 28, 1936 in Denton, Texas to Hazel Pearl (nee Mason) and Lewis Thomas Hunt. Funeral services for Garland will be conducted at 11:00am Saturday, February 29, 2020 in the Rosser Funeral Home Chapel with Dr. John Hall officiating. A visitation for family and friends will be held prior to the service at 10:00am.
A private burial will follow in Cooper Creek Cemetery Denton, Texas with Oscar Roa, Diego Roa, Glenn Scarbrough, James Johnson, Greg Grio and Caleb Hunt serving as pallbearers.
Garland touched many lives with his kind smile and true Texan charm. He was a member of Field Street Baptist Church, a 32nd Degree Mason, member of Moslah Temple Shrine and Fort Worth Scottish Rite.
A leader in the electrical industry since 1951, Garland held a Master Electrical License from the age of 21 to the end of his life. He and his wife of 50 years, Kathryn, owned and operated Hunt Electric, Inc. since 1978 in Cleburne, Texas. Garland had deep passions for genealogy, golfing, Honky-Tonk music, and loving his little bride.
Garland was a graduate of Tarleton State University and held a bachelor’s degree in Business Administration in addition to a four-year apprenticeship certificate through the IBEW, Fort Worth Texas.
He is preceded in death by his mother; stepfather, Leon Howell; father; daughter, Lyndee Hunt; and daughter-in-law, Dorothy Belew.
Garland is survived by his wife, Kathryn Hart Hunt; children, Roger Lawrence Hunt and wife, Cathy, of Cleburne, Mark Stephen Hunt and wife, Debbie, of Watsonville, California, Brian David Hunt and wife, Mary, of Winnsboro Texas, Dallas Kathryn Hunt-Miles and husband, Wesley, of Phoenix, Arizona and Victor Belew of Fort Worth; 14 grandchildren; 24 great grandchildren and one great-great grandchild; best friend, Gaylan Gregory of Hurst; and special nephew, Ryan Hink of Las Vegas, Nevada.

To order memorial trees or send flowers to the family in memory of Garland Thomas Hunt, please visit our flower store.