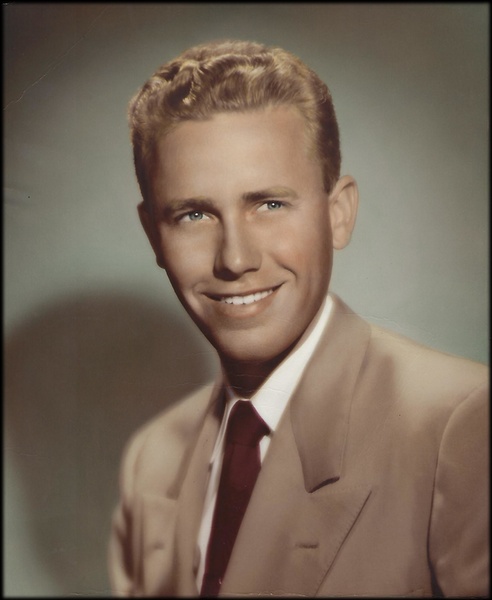 William Roger Hyde, aged 90, passed away on March 16, 2022, surrounded by his family in the Cleburne home that he built in 1962. Born in Nacogdoches, Texas, to George Wellington Hyde and Erma Wallace Hyde, Roger moved with his family to Cleburne at age two. Except for a few years away at university and working in the Texas panhandle, he was a lifelong resident of Cleburne. He graduated from Cleburne High School in 1948, and briefly attended Texas Christian University before leaving school to drive charter buses for his father=s company Central Texas Bus Lines. While driving the Baylor Religious Hour Choir on a national tour, the choir director Wesley Forbis discovered that Roger could sing and convinced him to enroll at Baylor. While there, Roger served as President and Treasurer of Circle K, sang in the BRH Choir and the Texas State Baptist Student Union Choir with his brother and best friend Frank Hyde. At Baylor, he also married his first wife Johnnie and celebrated the birth of his son David. After graduation in 1957, Roger and his young family moved to Pampa and then to Borger where Roger worked for Phillips Petroleum and daughter Lisa was born. According to Roger, two years in the Texas panhandle was more than enough, so he brought his family home to Cleburne in 1960. Roger and his father built houses in Cleburne for a few years before he joined IBM as a systems engineer. Despite the daily commute to Ft. Worth, Roger was always home for family dinner. He put the needs of his family ahead of his own turning down a promotion with IBM that would have required a cross-country move, opting instead to leave IBM and start Ridgeway Data Services in Cleburne. Roger was a long-time member of First Baptist Church, where he served as a Sunday school teacher, choir member, and chairman of the Board of Deacons. Roger was also lucky in love. After Johnnie passed away, Roger married Irene, his loving and devoted wife of these past 19 years. In recent years, Roger and his wife Irene have been members of Nolan River Road Baptist Church. In addition to being an avid golfer and club champion at Nolan River Country Club, Roger was active in the community serving as a board member of Cleburne National Bank and as a member and President of the Cleburne Rotary Club. Roger is survived by his wife, Irene O. Hyde, his children, David Wesley Hyde and wife Laura of Vicksburg, Mississippi, and Lisa Hyde Roach and husband E. Steve Roach, of Fredericksburg, Texas, and two grandchildren, Daniel Parker Hyde and Amelia Brooks Hyde. He is also survived by his sister, Joan Hyde Hinds, and sister-in-law, DiAnn Hyde, of Cleburne. He was predeceased by his wife of 45 years Johnnie S. Hyde, and his two younger brothers George Franklin Hyde and Charles Hayden Hyde. The Hyde family thanks Roger’s personal caregivers Elena, Carie, Vicki, and especially Stephanie whose steadfast and tender care made it possible for Roger to remain in his home for this past year. A funeral service will be held at 10 a.m. Saturday, March 19, 2022 in the Rosser Chapel, followed by a graveside service at Rosehill Cemetery. There is no visitation scheduled.
The family suggests memorial donations to the Rotary Foundation or to Baylor University, but the best way to honor Roger’s memory may be to follow his example of devotion to family and service to your church and community.

To order memorial trees or send flowers to the family in memory of William "Roger" Hyde, please visit our flower store.