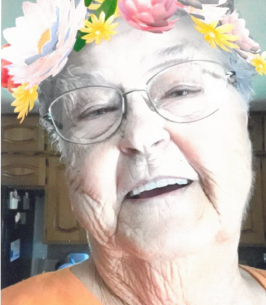 LaDonna Maureen Laymons Jackson, 83, of Alvarado, Texas passed away on Thursday, May 13, 2021, surrounded by her family.

Graveside services will be held at 2:00 P.M., Tuesday, May 18, 2021 at Greenacres Memorial Park. Pastor Kathie Moss will officiate. Her grandsons will be serving as pallbearers.

Visitation for family and friends will be held from 6-8:00 P.M., Monday, May 17 at Rosser Funeral Home in Cleburne.

LaDonna was born on September 19, 1937 in Chattanooga, Tennessee to Jimmy and Agnes (Phillips) Laymons. LaDonna had been active in Webelos, Cub and Boy Scouts with her husband, Howard and son, Steven, seeing her son become an Eagle Scout in 1985. She was also active in Daisies, Brownies, and Girl Scouts with her daughter, Katrina over the years, and was a Band Booster mother for both children for the “Golden Warrior Band” in Alvarado. She also volunteered for Meals on Wheels of Johnson County for two years with her best friend, Pat Smith.

She is preceded in death by her husband of 53 years, Howard Jackson of Alvarado, her parents, James and Agnes Laymons of Chattanooga, Tennessee, and her sister, Jimmie McCombs of Summerville, South Carolina.

LaDonna is survived by her son, Steve Jackson and wife, Sheila of Lumberton; her daughter, Katrina Tidwell and husband Kirk of Alvarado; sisters, Romain Taylor of Chattanooga, Tennessee, Louis Skiles of Kingston, Tennessee, and Debbie Murphy of Bridgeport, Alabama; 12 grandchildren; six great grandchildren and numerous nieces, nephews, and other relatives.
To order memorial trees or send flowers to the family in memory of LaDonna Maureen Jackson (Laymons), please visit our flower store.