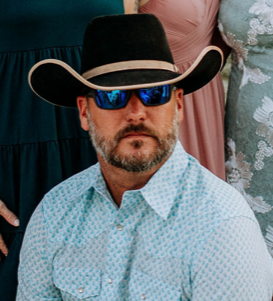 Bo was born on June 6, 1980 in Arlington, TX to Ann and Mike Kirkpatrick.  He graduated Joshua HS in 1998.  He was known to be adventurous during his teenage years; just ask his older brothers.

Bo was blessed with a loving family.  He met Hilary, the love of his life in 2002 and they married on June 28, 2003 in Burleson.  Their love granted them with two beautiful children, Camden Bo and Kamree Anne who were his greatest joys.

One of his many passions was his partnership with Justin McIntosh with Seco Creek Services where his business acquaintances and employees were more like family.  He worked hard over the years to provide for his family and recently settled in “their dream home” on 5 acres where they spent time together making memories to last a lifetime.

Bo was always the life of the party and lived his life to the fullest.  He had the biggest heart and would do anything he could to help those in need.  He loved cooking, hunting, fishing and the great outdoors.  He will be greatly missed by everyone who knew him.

A “Celebration of Life” will be held on Tuesday, May 24, 2022 at 2:00 p.m. at Bethel Temple Assembly of God, 600 S. Colonial Dr., Cleburne, TX.  Flowers may be sent to Rosser Funeral Home, 1664 W Henderson St., Cleburne.  Thereafter, contributions may be made in honor of his children via VENMO @KirkpatrickBenefitFund.

To order memorial trees or send flowers to the family in memory of Joshua Bo Kirkpatrick, please visit our flower store.