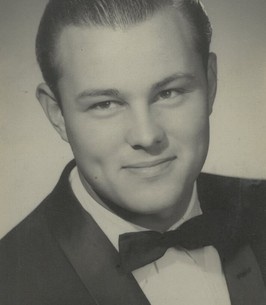 John Edward King, a life-long resident of Cleburne, Texas, passed away on July 4, 2020, at Harris Hospital in Fort Worth. He was born in 1942 to John Solon and Valla King.
John Ed graduated from Cleburne High School in 1961 and Texas Christian University in 1965. He was married to Mary Corzine for fifty-six years and had two children, Kari and Bryan.
After graduating college, he proudly served as a Captain in the United States Air Force, stationed in Dover, Delaware. Returning to Cleburne, John Ed resumed a family tradition of ranching on acreage that he held dear until he died. He was a successful banker and part owner of Brazos Bank in Joshua and Alvarado. John Ed was a board member of the Cleburne Independent School District where he served as President and was a member for seven years.
John Ed packed a lot of life into 77 years. He was passionate about flying, riding motorcycles, hunting and fishing with friends and spending time with his family. He became a Christian at an early age and was an active part of First Baptist Church, and later Cleburne Bible Church.
John Ed was preceded in death by his parents.
He is survived by his wife, Mary; daughter, Kari Spence and her partner, Scott Kruka, of Dallas; son, Bryan King and wife, Deanna, of Cleburne; two sisters, Carolyn Kasper and husband, Jerry and Barbara Pletcher and husband, Rockney. He had four granddaughters, Elizabeth Spence, Natalie Spence, Hillary King, and Hannah King; numerous nieces and nephews; and his beloved caregiver, Ruby York.
Private graveside services only.
In lieu of flowers donations may be made to the Tarrant Area Food Bank at 2525 Cullen Street, Fort Worth, TX 76107 or on their web at tafb.org.
To order memorial trees or send flowers to the family in memory of John Edward "John Ed" King, please visit our flower store.