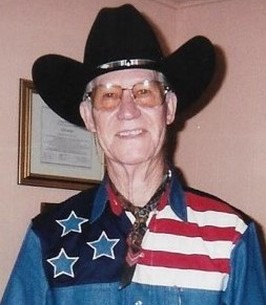 Funeral services for Thomas Hubert “Dugan” Lain, 87, of Burleson, Texas will be conducted at 10 a.m. Friday, August 21, 2020 in the Rosser Funeral Home Chapel with the Rev. Russ Weaver officiating.
Burial will follow in Rosehill Cemetery.
A visitation will be held from 6 – 8 p.m. Thursday, August 20, 2020 at Rosser Funeral Home.
Serving as pallbearers will be Jason Lain, David Hamburg, Griffin Lain, Carter Lain, Charlie Lain, and Ladd Lain.
Dugan Lain passed away Monday, August 17, 2020 in Burleson, Texas. He was born in Cleburne, Texas on September 30, 1932, the son of Susie (Hurt) and W. T. Lain. He was one of eight siblings in his family.
Dugan served four years in the United State Air Force stationed at Hill Air Force Base in Utah where he was attached to the 764th Bomb Squadron as an Aircraft Electrician. He served from October 1951 to October 1955. During that time, he received the National Defense Service Medal and Good Conduct Medal.
He worked as a mechanist most of his life and could repair most anything with a motor or wheels. Dugan was a woodworking genius, creating many unique pieces of as gifts and for his home. He loved to repurpose old wood into a variety of things, including photo frames, lamp stands, hall trees and tables. Dugan and his son, Jason, built the log house he lived in for almost 40 years.
Dugan married JoAnn Jackson in June 2005. They attended Cleburne High School and were in classes together. They reconnected in a chance meeting at the Lain Family homestead on the Brazos River in 2004. Dugan and JoAnn were married on horseback, which was not a surprise given his lifelong love of horses. They were members of Shepherd’s Valley Cowboy Church in Cleburne.
He is survived by his wife, JoAnn Lain of Burleson; daughter, Sherri Hamburg and husband, David, of Burleson; son, Jason Lain and wife, Jill, of Burleson; grandchildren, Shelby Hamburg, Griffin Lain, Carter Lain, and Charlie Lain, all of Burleson; two sisters and two brothers; and numerous other family members and friends.
The family invites you to view photos at https://photos.app.goo.gl/iFrMTK33seB6tNCf8.
To order memorial trees or send flowers to the family in memory of Thomas Hubert "Dugan" Lain, please visit our flower store.