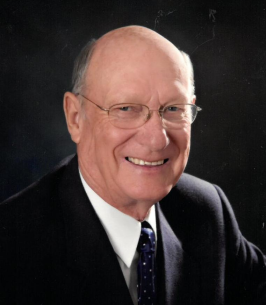 Max F. Marsh was called to his home in heaven on Friday, July 26, 2019 in Cleburne. He was born September 15, 1936 in Weaubleau, MO to Ina (Comfort) and Frank A. Marsh and graduated from high school there. He then went to school at Missouri State University in Springfield and graduated with a BS degree in Business Management in 1958. He took ROTC all four years and received his commission of 2nd Lt. in the US Army upon graduated. He served at Ft. Lee, VA and was discharged as Captain from the US Army Reserves in 1966.

Max married Margaret Jayne “Peggy” Webster on December 21, 1958 in Harrisonville, MO, but most of their married life was in Texas, from Amarillo to Ft. Worth to Houston to Carrolton/Dallas to Cleburne, which was their favorite place to live.

In 1959 Max started his career in the glass business with Craftsman Glass in Amarillo in sales and management. In 1963 he and Peggy moved to Tulsa, OK with a glass company there as contract manager and general manager. He then went to work with PPG Industries as Branch Manager and was promoted up the management ladder to District Manager in Houston and manager, construction operations, south central states until 1988. He was responsible for the sales and management of the installation of millions of dollars of glass and aluminum on high- rise office buildings in this area.

Max accepted Jesus as his Lord and Savior on August 15, 1945 and was baptized on September 8, 1945. He was ordained a deacon on September 27, 1970 and ordained as a Minister of the Gospel on February 17, 1991 and was Pastor of the First Vietnamese Baptist Church of Carrolton for eight years. After he retired in 1998, he moved to Cleburne and became a member of Field Street Baptist Church. He remained active in teaching the Young Married Sunday School class and later the Word Seekers class, working in the church and serving the Lord with his wife, Peggy. He helped her in establishing a prayer room ministry at Field Street Baptist Church. He also served as a deacon at the church and sang in the Joyful Sound Choir. Max was preceded in death by his parents; brother, Chuck Marsh; and an infant sister.

Survivors include his faithful and loving wife, Peggy Marsh; daughters, Denise Smith and husband Kurt of Flower Mound and Shelly McNulty and husband Rock of Smithville. Their “Poppy” was sure proud of his two granddaughters, Emily Thoma and husband Oliver and Callie Ward and husband Tommy; grandson, Dillon Smith; great grandchildren, Gaines Thoma, Harrison Thoma, and Lainey Ward; 14 nieces and nephews; and numerous other relatives and friends.
Memorials may be made to: Alzheimers Association at www.alz.org

To order memorial trees or send flowers to the family in memory of Max F. Marsh, please visit our flower store.