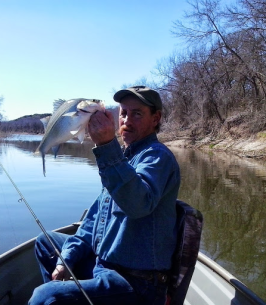 A memorial service celebrating the life of Thomas Brackney Moore, 59, of the Sand Flat Community near Grandview, Texas will be held at 11 a.m. Thursday, March 28, 2019 at Watts Chapel United Methodist Church.
Brack, as we all knew him, passed away on March 23, 2019 at his home. He was born in Brownwood, Texas on March 10, 1960, the fourth child and third son on Joe and Flora Moore.
As a youngster, he loved and played baseball and football. Brack was very involved in Boy Scouts and loved the outdoors.
That was a trait that lasted his whole life. He loved traipsing through the woods, looking for that big buck he’d been keeping his eye on. But Brack was also an avid fisherman. He loved catching those sand bass and crappie but like most fishermen, claimed that the crappie were the best to eat!
For years Brack had a yearly tradition of a Brazos River camping trip with friends and family.
Some of you may have participated in a few of those.
He played hard when he played and worked hard when he worked. There are many buildings, roofs, garages and barns around the area to reflect that.
Brack owned and operated his own Big Rig for many years. Most recently, he owned and operated Metal Buildings and Moore.
Brack was most aptly named after his grandfather, W. L. Brackney. Some of you from around Sand Flat may have known him. Brack was so much like him, that if you knew one of them, you’d know the other. Brack did, however, have a somewhat kinder, gentler side that showed more often. He was probably the least judgmental person you would ever meet. He believed that everyone ought to do what they felt like they needed to do and he certainly did the same.
Brack met the “love of his life” in school at Grandview and Gina became a part of the family in late 1989.
Brack was preceded in death by his grandparents, Sam and Hazel Moore and W. L. and Cora Brackney; parents, Joe and Flora Moore; brother, Joe Moore; infant sister, Kaylee Moore; Gina’s parents, mother, Elda Bennett and husband, Ardie and father, George Hendrix; and a nephew, Little Tony.
He is survived by Gina Hendrix; sister, Marijane Gilley and husband, David, of Brownwood, Texas; sister-in-law, Kay Moore of Paul, Idaho; brother, Jim Moore and wife, Jackie, of Cleburne, Texas; sister, Bridget Gross and husband, Tony, of Alvarado, Texas; brother, Greg Bennett, wife, Teresa, and daughter, Kimmee, of Alvarado, Texas; nephew, Lance Gilley, wife, Shana, children, Lane and Shelby, of Weatherford, Texas; nephew, Blake Gilley, wife, Jennifer, children, Abby and Levin, of Broomfield, Colorado; nephew, Jason Moore, wife, Valorie, children, Alex, Dawson, Cheyenne, Dallon, Ruby and Dallen of Rigby, Idaho; nephew, Christopher Moore, wife, Savannah, children, Ethan, Shawn, Chelsea, Kiera and Kaiden, of Weatherford, Texas; niece, Kaylee Moore and Cody Kester, of Rupert, Idaho; nephew, Dustin Moore, wife, Liz, daughter, Ardyn of Sarasota, Florida; nephew, Brack Moore of Joshua, Texas; nephew, Ti Skiles and wife, Deanna, of Arlington, Texas; and nephew, Andy Gross, wife, Michelle, children, Maci, Skyler, Garrett and April, of Carl’s Corner, Texas; and many other family members and friends.
To order memorial trees or send flowers to the family in memory of Thomas Brackney "Brack" Moore, please visit our flower store.