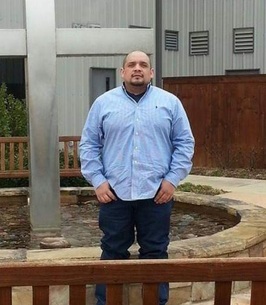 Funeral services for Augustin Moreno, 42, of Burleson, Texas will be conducted at 1 p.m. Friday, January 22, 2021 at The Heights Church in Cleburne with the Rev. Stephen McCoy officiating. Burial will follow in Rosehill Cemetery.
A visitation for family and friends will be held from 6 – 8 p.m. Thursday, January 21, 2021 at Rosser Funeral Home.
Serving as pallbearers will be Paul Allen, Andy Moon, Terry Youkins, Jr., Matt Hall, Jeff Whitehead, Billy Comstock, Nicasio Aguilar, and Selvin Eagans. Honorary pallbearers will be Manuel Moreno, C. P. Sapien, Ben Sapien, Ydlifonso “Moses” Sapien, Nick Sapien, Nathan Sapien, Daniel Hernandez, Chris Ramirez, Miguel Garcia, Joseph Sapien, and Richard Quintero.
On January 14, 2021, Augustin entered into the presence of his Lord, Jesus Christ, and received his wings and crown.
Augustin was born September 7, 1978 in Plainview, Texas to Dolores Sapien. He came to be known as Joey because his brother Manuel was still little and could not say that big name so we all called him Joey. He was also known as Augie to some and Yogi Bear to others. Augie was a loving dad, son, brother, nephew, cousin, and friend.
He attended Texas Bible Institute in Columbus, Texas and was a member of The Heights Church in Cleburne. His passion was to worship, praise, serve Jesus, and to tell others about Him.
Augie had worked at Johns-Manville since 2001 and he loved his work family, especially his crew buddies. He loved to watch the Dallas Cowboys and the Dallas Maverick games, lift weights, and grill steaks. He also loved his big beautiful truck, sunflowers, and his pride and joy Brooklynn.
Augie was preceded in death by his maternal grandparents, Amelia and Cipriano Sapien and his paternal grandfather, Joe Mareno.
He is survived by his daughter, Brooklyn Taya-Marie; his mother, Dolores Sapien; inherited father, Juan Gonzalez; brother, Manuel Moreno and partner, Cynthia Gomez; nephews, Izaiah, Alex, and Anthony; fiancée, Amanda Wethington and her children, John, Danielle, and Hayvn; his inherited brother, Ron Pruitt and his daughters, Averi and Miah; and a host of aunts, uncles, cousins, and friends who loved him dearly.
To order memorial trees or send flowers to the family in memory of Augustin Moreno, please visit our flower store.