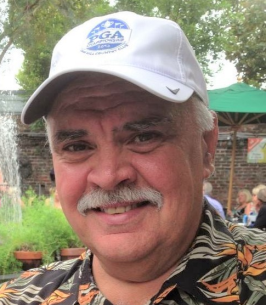 Mark Morton, 62, of Cleburne, Texas passed away Friday, August 13, 2021 in Fort Worth, Texas. A Celebration of Life will be held at 10 a.m. Saturday, August 28, 2021 at Field Street Baptist Church.
Mark was born in Cleburne on June 22, 1959, the son of Joy Angelene (Hix) and Billy Jay Morton. Mark married Christy Billings on September 29, 1989 in Lake Tahoe, Nevada.
He began his railroad career with the Santa Fe Railway in Clovis, New Mexico in June of 1978. Mark was a locomotive engineer and was also experienced in rail test cars. He was a member of BLET Division #500 for 25 years where he served as President and also served a legislative representative.
Mark participated in Operation Life Saver which educated the public to reduce the likelihood of vehicle/pedestrian/train collisions and was Texas Division Safety Coordinator for 8 years.
Mark was active in the United Way for over 20 years. As an avid golfer, he loved playing golf with his girls and his good friends.
Mark was a Marshall for Colonial Country Club Annual Golf Tournament for 10 years.
He was a member of Field Street Baptist Church.
Mark was preceded in death by his parents, Bill and Joy Morton.
He is survived by his wife, Christy, of Cleburne; daughters, Alexis Hollis and husband, Christopher, of Frisco, Texas and Rachel Morton of Waco; grandson, Hayden Hollis of Wichita Falls, Texas; brothers, Monte Morton and wife, Katrina, of Denver, Colorado and Craig Morton of Albuquerque, New Mexico; aunts, June Morton of Livingston, Texas, Sandy Morton of Liberty, Missouri, and Joyce Emmert of Cleburne; mother-in-law, Bill Ann Billings of Cleburne; brothers-in-law, David Billings and wife, Wendy, of Burleson, Texas and Steve Billings and wife, Melinda, of Kentucky; nieces, Jessica Morton and Stephanie Billings; and nephews, Dylan Morton, Zach Billings, Beau Billings and Brandon Gremminger and wife, Kati; and other relatives and many friends.
Memorials may be made in Mark’s name to his favorite charities, The Wounded Warrior Project (http://woundedwarriorproject.org) and The United Way (http://unitedway.org).
To order memorial trees or send flowers to the family in memory of Mark Morton, please visit our flower store.