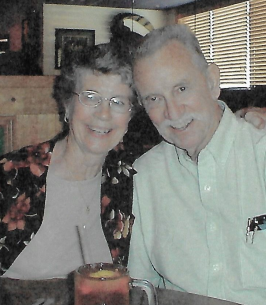 Peggy Mulkey (Margaret Elenora Guley), 91, of Cleburne, Texas, passed from this life into the next on December 12, 2019.
Graveside services will be conducted at 10:00 a.m., Tuesday, December 17, 2019 at Glenwood Cemetery in Alvarado, Texas.
Peggy was born October 17, 1928 in Springfield, Missouri and was adopted by Ed and Bessie Guley of San Antonio, Texas. Peggy was a superlative student who graduated High School at 16 years old, and moved with her parents to Springdale, Arkansas. There she met James RL Mulkey, while working at Roland’s Department Store. They went dancing on their first date and jitterbugged into 62 years of marriage, beginning July 23, 1946. They had three children, Margarett R'Lene, Jerry RL and James R'Lan (Pat). James R'Lan (Pat) married Becky Pair and they had two children, Jessica Rae Lynn and Jacob RL. Pat preceeded his mother in death.
Peggy not only reared children working alongside RL in diverse projects, but also worked full time outside the home. She worked as Treasurer of the Christian Church at TCU, in different ancillary medical positions and as a substitute teacher at Alvarado ISD. She and RL built a 4000 sq. ft. passive energy home on Lake Alvarado, where the family and many friends enjoyed water sports. Peggy was a fun-loving person who decorated their large home for Christmas, and other holidays, to the max.
She worked hard, cracking one-liners at every opportunity, even during her last days when she was very ill. Besides Peggy’s sense of humor, she was known for her total dedication to family, especially her Grandchildren Jessica and Jacob. During their childhood Peggy and RL often traveled and shared adventures with them. Jessica married Kyle Driscoll and they now have two children, Lucas Andrew and Claire Emersyn, Peggy’s Great Grandchildren.
After being widowed, Peggy lived for the next twelve years with R'Lene, while volunteering at Texas Health Harris Hospital and enjoying theatre at the Plaza and Carnegie Theatres. Peggy is also survived by ten half brothers and sisters: Wilma Nadine, Carrie Lucille, Mary Marlene, Wanda Susan, Ruth Ann, Helen Elizabeth, Howard Warren, Doris Ailene, Thomas Allen, and David Wade, all of Missouri. She will be sorely missed.
To order memorial trees or send flowers to the family in memory of Peggy Mulkey, please visit our flower store.