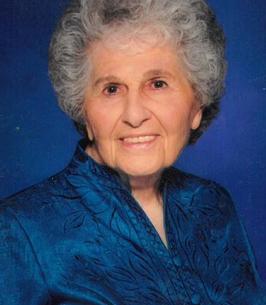 Loneta Richter Pauly was born on June 14, 1921 in Keene, Texas. She passed away on December 22, 2018 in Keene. She graduated from Southwestern Junior College in 1941, and
was teaching in Austin, TX when she met and married Albert Pauly who was stationed there in the United States Army.
He was sent to Europe during WWII and when he returned, they both graduated from Union College. She and her husband, Albert, were educators in Keene Public Schools from 1952 to 1979 and at Chisholm Trail Academy from 1979 until his death in 1989.
She was a very active member of the Keene Seventh-day Adventist church. She was lovingly known to her family as “Dody”, a name given her by he granddaughter, Courtney.
She was preceded in death by parents, Lillie (Rollins) and Albert Richter; and three brothers and five sisters.
Mrs. Pauly is survived by her sister, Helen Barber of Keene; son, Steve Pauly and wife, Rose, of Fort Collins, Colorado; daughter, Lisa Pauly Jenkins and husband, Ken, of Burleson, Texas; grandson, Brent Pauly and wife, Erica, of Gilbert, Arizona and their children, Triston and Fiona; grandson, Chris Pauly and wife, Bekah, of Pensacola, Florida; grandson, Ryan Pauly and wife, Emily, of La Habra, California; granddaughter, Courtney Jenkins Jordan and husband, John, of Arlington, Texas; granddaughter, Janine Jenkins Lechleitner and husband, Tom, of Fort Lupton, Colorado and their children, Wyatt, Christian and Hannah; grandson, Allan Jenkins and wife, Gina, of San Antonio, Texas; and numerous nieces, nephews and many dear friends.
The family sends special thanks to The Gardens at Chisholm Trail Estates for taking such good care of our sweet mom.
In lieu of flowers, donations to the Albert & Loneta Pauly Scholarship Fund at CTA would be appreciated.
Funeral services will be conducted at 3 p.m. Saturday, January 12, 2019 in the Keene Seventh-day Adventist Church. Burial will follow in Keene Memorial Park Cemetery. A visitation for family and friends will be held from 6 – 8 p.m. Friday, January 11, 2019 at Rosser Funeral Home in Cleburne.
To order memorial trees or send flowers to the family in memory of Loneta Dody Pauly (Richter), please visit our flower store.