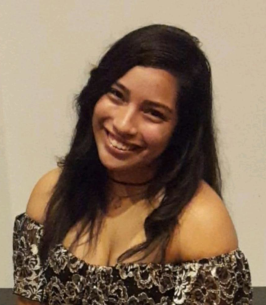 Funeral service for Lauren Reyes, 22, of Burleson, Texas will be conducted at 10 a.m. Friday, March 22, 2019 at St. Joseph Catholic Church in Cleburne, Texas. Father Sergio Rizo will officiate. Burial will follow in Caddo Cemetery in Joshua, Texas.
Visitation with Rosary will be held from 6-9 p.m., Thursday, March 21, 2013 at Rosser Funeral Home.
Serving as pallbearers will be James Murphy Sr., James Murphy, Jr., Santiago Hernandez, Bryan Hernandez, Michael Marin, Mateo Salinas and Joseph Marin.
Lauren passed away Thursday, March 14, 2019 in Burleson. She was born September 12, 1996 in Fort Worth, Texas, the daughter of Casimira (Marin) and Jesus Reyes.
Lauren was a 2015 Joshua High School graduate and was attending Sam Houston State University in Huntsville, Texas aspiring to become a veterinarian.
Lauren served as a Specialist in the United States Army National Guard and was of the Catholic faith.
She was preceded in death by her grandfather, Henry Marin, Sr.; and one uncle, Mario Marin.
She is survived by her parents, Casimira “Cassi” and Jesus Reyes; brother, Joseph Marin; and sisters, Alexandra “Alex” Reyes and Christina Reyes, all of Burleson; grandmother, Mary Marin of Burleson; grandparents, Felipe and Hope Reyes of Cleburne; her beloved fur babies, Baby and Sugar; and a host of other relatives and friends.

To order memorial trees or send flowers to the family in memory of Lauren Reyes, please visit our flower store.