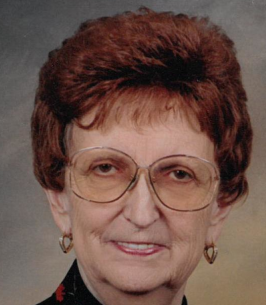 Funeral services for Evelyn Richardson, 85, of Grandview, Texas will be conducted at 2 p.m. Friday, April 5, 2019 in the Rosser Funeral Home Chapel with the Rev. Jerry Clements officiating. Burial will follow in Rosehill Cemetery. A visitation for family and friends will be held from 12 p.m. to 2 p.m. prior to the service.
Serving as pallbearers will be Rusty Richardson, Garrett Shamblin, Hoby Wright, Todd Richardson, Brent Jones and Scott Pustejovsky.
Mrs. Richardson passed away Wednesday, April 3, 2019 in Fort Worth, Texas. She was born in Johnson County, Texas on January 28, 1934, to Metta Nora (Homesley) and Ross Lee Decker.
Evelyn married Victor Wayne Richardson on June 24, 1955, in Godley, Texas.
Mrs. Richardson had worked for the FWISD with the free lunch program.
She was preceded in death by her parents; husband; and brother, Carlos Decker.
Mrs. Richardson is survived by her sons, Dwayne Richardson of Athens, Texas and Paul Richardson and wife, Melissa, of Grandview; daughter, Norita Jones and husband, Brent, of Cleburne; nine grandchildren and six great grandchildren.

To order memorial trees or send flowers to the family in memory of Evelyn Richardson (Decker), please visit our flower store.