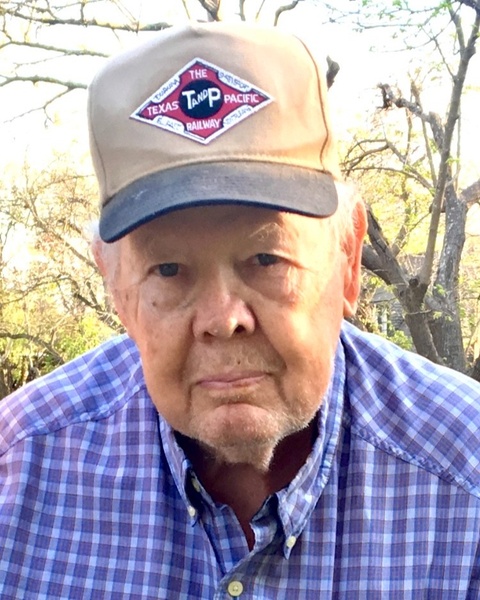 A graveside service for R.D. Curtis Jr., 87, of Cleburne, Texas will be conducted at 11:00 A.M., Monday, October 3, 2022 in Greenacres Memorial Park. Brother Dan Griffin will officiate.

He would go on to make a lifetime career with the railroad, working for Santa Fe until moving to Union Pacific in 1968. He worked in the diesel shop and as a union representative for the Union Pacific Railroad until his retirement in 1997.

In the early sixties, R.D. & Kaynell developed a passion for antiquing. After finding many pieces to restore, R.D. would turn his skills into a part time business restoring furniture. In his spare time after retirement, he enjoyed shopping with the family and watching classic westerns on the television.

For decades he enjoyed Halloween and handing out candy to hundreds, if not thousands, of children at his home on the corner of Westhill and Prairie in Cleburne.

For those who knew him, R.D. will always be remembered as a lover of the morning newspaper, coffee, books, music, clocks, animals, old folks, and children. He had a creative sense of humor known for giving people often fitting and entertaining nicknames. He was a member of the Calvary Baptist Church in Cleburne.

He departed this earthly world to join his loving wife of over sixty years, his parents, and siblings in Heaven during the early hours of September 28th, 2022.

To order memorial trees or send flowers to the family in memory of R.D. Curtis, Jr., please visit our flower store.