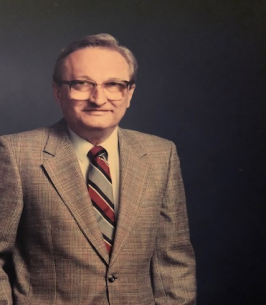 Dr. William C. Smyth, formerly of Tyler, Texas, passed away on Friday, December 11, 2020 at the age of 94. Bill was born in Cleburne, Texas to Mr. and Mrs. Olin T. Smyth on September 26, 1926. He wanted to follow his brother’s footsteps into medicine, getting his start as a medical technician in the U.S. Army, 183rd General Hospital Unit at Fort Richardson, Alaska, receiving his honorable discharge in December 1946. Bill was awarded his B.A. degree from the University of Texas at Austin in 1949. He married Mary Gean Turner, also of Cleburne, on June 16, 1951. Bill received his M.D. with honors from U.T. Galveston in 1953 and served his internship and residency in Fort Worth, Texas from 1953 to 1955. He joined Medical and Surgical Clinic in Tyler, Texas in 1955 where he engaged in the practice of family medicine for the next 40 years. Bill was a member of the Smith County Medical Society and the Texas Medical Association, serving on the Board of Councilors for TMA. He was a member of the Texas and American Academies of Family Practice and a Fellow of the AAFP. He was a member and past president of both Medical Center Hospital and Mother Frances Hospital in Tyler, Texas. Bill was a member and past president of the Tyler Lions Club, past chairman of the Board of Directors of Texas Eastern School of Nursing and on the Board of Directors for Southside Bank from 1977 to 2015. He was a longtime member of Glenwood Church of Christ where he served as a deacon. Bill loved his Friday golf outings with “the guys” and he was an avid baseball fan. A skilled and compassionate physician, he was loved by his patients and respected by his peers. He is survived by his devoted wife of 69 years, Mary Gean Smyth; son, Stephan Smyth and wife, Sharon of Keller, Texas; daughter, Stephanie Grant and husband Bob of Colleyville, Texas; daughter, Sallee Schwartzberg and husband, Scot, of Richmond, Texas; grandchildren, Virginia and Luke Walker, William C. Smyth, Griffin and Amanda Smyth, Austin and Anita Caudle and Ben Schwartzberg; great grandchildren, Wyatt, Owen, Aubrey and Tyler; and many beloved nieces, nephews and cousins. Funeral services will be held at 1:30 p.m. Monday, January 4, 2021 at Rosser Funeral Home, Cleburne, Texas followed by burial in Rosehill Cemetery.
Donations may be made to the Alzheimer’s Association or Christian Homes and Family Services in Tyler, Texas.
To order memorial trees or send flowers to the family in memory of Dr. William C. Smyth MD, please visit our flower store.