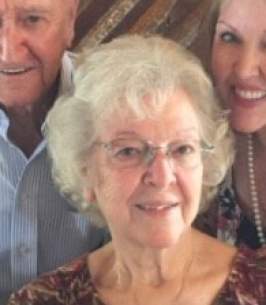 Alberta R. Stanley, 83, of Cleburne, Texas passed away on July 7, 2020, surrounded by family at Community Hospice House in Burleson, Texas.
Alberta was born November 18, 1936, to the late Ivas O. Barger and Eva L. (Deal) Roberts in Shawneetown, Illinois. She married John A. Stanley on July 11, 1953, and moved to Texas in 1979.
Alberta was a loving wife, mother, grandmother, great grandmother, and sister. She was a faithful member of High Point Church of God in Cleburne, Texas and lived her life sharing her love of people and her faith in Jesus with all who knew her.
Alberta was loved dearly and will be missed by all her family and friends. She was truly a woman whose children rise up and call her Blessed.
Loved ones include “Jack”, her husband of 67 years; a daughter, Lois Scheier of San Antonio, Texas; and sons John O. Stanley and James D. Stanley (Shelley), all of Cleburne, Texas.
Grandchildren who will miss their “Nanny” are Brent Charleton of Spicewood, Texas, Jaclyn Calhoun (Jeff) of San Antonio, Texas, Allison Scheier, of San Antonio, Texas, Trevor Stanley (Tayla), Tatum Douglas (Tyler), Treyson Stanley, and Tyson Stanley, all of Cleburne, Texas; and
great grandchildren, Charlie and Scarlett of San Antonio, Texas and Greyson, Brantlee, Evie-Mae and Maddoxx, all of Cleburne, Texas.
Surviving siblings include Patricia Smith of Shawneetown, Illinois, Lela Partain of Harrisburg, Illinois, Larry Roberts (Sue) of Herrin, Illinois, Lou Adamson of Morganfield, Kentucky, and Bob Roberts (Diane) of Sturgis, Kentucky.
Alberta was preceded in death by her parents; stepfather, Louis T. Roberts; brother, Albert Barger; sister, Gerry Green; and step-brothers, Louis C. Roberts and Danny Roberts.
Visitation for family and friends will be held from 6-8pm. Thursday, July 9, 2020 at Rosser Funeral Home. Funeral service will be conducted at 2 p.m. Friday, July 10, 2020 in the Rosser Funeral Home Chapel.
Burial will follow at Rosehill Cemetery in Cleburne.
In lieu of flowers, donations may be made to Community Hospice, 501 N. Ridgeway Dr, Cleburne, Texas 76033.
To order memorial trees or send flowers to the family in memory of Alberta Rose Stanley (Barger), please visit our flower store.