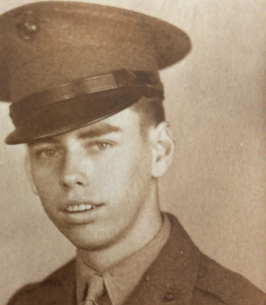 Funeral services for Robert Allen Stewart, 95, of Cleburne, Texas will be conducted at 10 a.m. Monday, April 12, 2021 at The Episcopal Church of the Holy Comforter in Cleburne. Father Cooper Wise Morelock will officiate. Burial will follow in Cleburne Memorial Cemetery.
Mr. Stewart passed away Wednesday, April 7, 2021 in Cleburne. He was born in Corpus Christi, Texas on May 6, 1925, the son of Katherine “Kate” (Haley) and Milton Anderson Stewart.
Mr. Stewart graduated from LaPoynor High School and then TCU with a BS in secondary education.
He served in the USMCR during World War II from 1943-1946, with the 5th Marine Division on Iwo Jima and during the occupation of Japan.
Mr. Stewart then served in the USMCR from 1949-1953 including active duty from 1950-1951 in Inchon/ Chosin and Central Korea. He received three presidential unit citations and four battle stars.
Robert and Beth Stewart were married July 16, 1951. They were married for 57 ½ years before her death.
After the military, Mr. Stewart worked 40 plus years with various companies and positions in the aircraft and missile industries. He retired after 20 plus years with Bell Helicopter in 1991.
Along with his parents and wife, Mr. Stewart is preceded in death by his son, George M. “Skip” Stewart.
He is survived by his grandchildren, George Smithwick and wife, Susan, Randy Stewart and wife, Cheryl, Ryan Stewart and wife, Davina, Shellie Penny and husband, Lee; daughter-in-law, Shirley Stewart; nine great grandchildren; and many nieces, nephews, and cousins.

To order memorial trees or send flowers to the family in memory of Robert Allen Stewart, please visit our flower store.