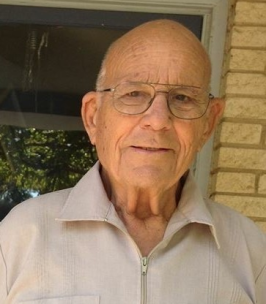 Graveside services for William R. “Bill” Stringer, 91, of Cleburne, Texas will be conducted at 10 a.m. Friday, June 12, 2020 at Rosehill Cemetery with the Rev. John Glover officiating.
Honorary pallbearers will be Sam Stringer, Mason Stringer, Roby Stringer, Matt Kendall, Greg Brown, Cooper Liebau, Steve Lanman and, Jimbo Morris.
There is no visitation scheduled.
A lifelong resident of Cleburne, Bill was born on September 27, 1928 to Carl and Olga Stringer and passed away on Monday, June 8, 2020.
He married Bobbie Jo Brown on September 3, 1949.
Bill was a printer by trade. For 22 years he worked for The Fort Worth Press, until its closure in 1975. In 1976, he opened a Polar Bear Ashburns Ice Cream store in Cleburne.
He grew up attending East Henderson Street Baptist Church. In 1968, he and Bobbie moved their membership to Field Street Baptist Church, where they were faithful members for over 50 years.
Bill was a member of the Cleburne Masonic Lodge #315. Until his death, he was the oldest living Past Master of the lodge. In 2019, he received his 65 year pin from Lodge #315.
Bill and Bobbie were members of the Curli Q’s square dancing group and the Satellite Camping Club.
He grew up in Boy Scouts and later was Asst. Scout Master of Troop 1212, where he shared the scouting experience with both his sons. Bill loved to cook, whether it was indoors, outside on the grill, or over an open flame.
He was preceded in death by his parents; brother and sister-in-law, Carl Jr. and Veta Stringer; and daughter-in-law, Delia Stringer.
Bill is survived by his wife of 70 years, Bobbie; daughter, Mende Bruce of Cleburne; sons, Monte Stringer and wife, Taree, and Marty Stringer and wife, Lisa. He also leaves behind six grandchildren: Sam, Nan, Matt, Morgan, Mason, and Jordan, as well as four great grandchildren: Skyler, Reeves, Mercer, and Spaid.
To order memorial trees or send flowers to the family in memory of William R. "Bill" Stringer, please visit our flower store.