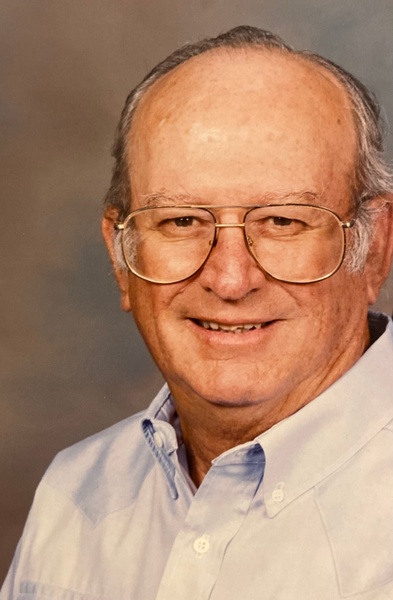 Ted was born in Cleburne on February 14, 1931, at home on Sunset Ave. to Corrie (Dodson) and Charles Oran Jones and was the youngest of three children.  He spent all but a few years of his life in Cleburne, graduating from Cleburne High School.  After graduation, Ted attended the University of Texas where he was a member of the Longhorn water polo team, thus his lifelong love of his Longhorns.

On January 24, 1949, he joined the United States Air Force to serve in the Korean War.  He was honorably discharged on October 5, 1952 and returned to Cleburne, where he met the true love of his life, Barbara Bridges.  They were married August 14, 1954 and were married for 67 years before her death in May of 2022.  After several job opportunities requiring relocation, Ted and Barbara settled in Cleburne to raise their two children.  Ted spent most of his working years as a long haul truck driver before purchasing Brazos Peanut Company.  His other passion in life was golf that he shared with many of his friends and his granddaughter, Emily. He and Barbara were very involved in the lives of their grandchildren and then their great-grandchildren who were all very special to them.

The family would like to thank Envoy Hospice and Alpha Omega Hospice for their care and compassion for Ted along with his wonderful caregivers, Lei Crosier, Amy Poteet, Dorothy Boatwright, Tracey Robinson and his granddaughter, Mecca Hickox.

To order memorial trees or send flowers to the family in memory of Ted Dodson Jones, please visit our flower store.