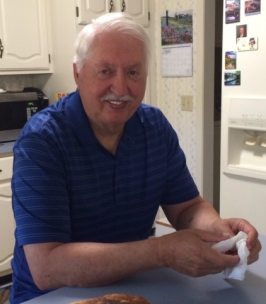 A memorial service for Curtis O’Neal Tidwell, 78, of Keene will be conducted at 11:00 A.M., Sunday, January 6, 2019 in the Keene Seventh-day Adventist Church Sanctuary. Pastor Adrian Solis will officiate.
Curtis O’Neal Tidwell passed away Tuesday, December 18, 2018 in Keene. Curtis was born August 26, 1940 in Marietta, Texas to Lonnie Edward Tidwell and Etta Elizabeth (Snelgrove) Tidwell.
He attended Sandia View Academy in New Mexico from 1956 to 1960. There he met the love of his life, Janet Reese. He then went to Madison College in Wisconsin, where he received his degree in X-ray Technology.
His first job was in Beeville, Texas where his children were born and raised until 1978. He then took the position as the Director of Radiology at Huguley Hospital, where he worked until his retirement in 2005.
Shortly after retiring he met the medical challenge of his life and survived an aortic aneurysm. He was blessed with an additional 12 years with his family and friends before another aneurysm took his life. Curtis was preceded in death by his parents; one brother, Edward Tidwell; four sisters, Nettie Vaughan, Merle Fincher, Lorena Stigaullde, and Lee Ellen Duncan.
Curtis is survived by his beloved wife of 57 years, Jan Tidwell of Keene; children, Tim and Kim Tidwell of Fayetteville, Arkansas, Robin and Joe Hawkins of Mineral Wells, Texas and Lynda and Mark Scroggins of Dallas, Texas; two grandchildren, Megan Brooke and Ryan Scott Tidwell; two sisters, Bernice Foster and Dorothy Hickson.; one brother, Johnny and wife Lynn Tidwell; and many beloved cousins, nieces, nephews, and friends.
In lieu of flowers the family asks that donations be made to Meals On Wheels of Johnson & Ellis County or ADRA "Adventist Development and Relief Agency".
The service will be streamed live on the Keene Church website or on YouTube.
To order memorial trees or send flowers to the family in memory of Curtis O'Neal Tidwell, please visit our flower store.