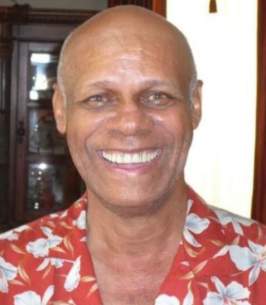 Calvin Joseph Toval died on December 19, 2020 of a massive cerebral hemorrhage during his sleep. He was taken from his residence at the Chisholm Trail Estates in Keene Texas to the Texas Health Hospital nearby in Cleburne Texas where he was later pronounced dead by Doctor David Reid. He received the final Catholic rites of Anointing of the sick (formerly Extreme Unction) at approximately 5 pm.
Calvin had been recovering from Covid-19. He was cleared and tested successively negative of it in October 2020
Calvin is the son of Mr. Ferdinand Raphael Toval (d) and Agnes Katherine (Francois) Toval (d), both natives of New Orleans Louisiana. He is survived by five siblings Ferdinand Anthony Toval, Yvonne Marie (Toval) Handy, Raymond Raphael Toval, Janet Margaret (Toval) Audrict and Carmen Vivian (Toval) Johnson, He is preceded in death by Herbert Paul Toval (d).
Calvin Is the father of 2 daughters Nicole Sirju Johnson and Candice Sirju Arnold. Nicole resides in New York state and Candice in Maryland. He has 5 grandchildren.
Earlier in life Calvin attended the Catholic Seminary in Bay Saint Louis Mississippi. He was following a life goal of the priesthood but after 3 years decided to change and pursue a secular life instead. He left the seminary and attended and graduated from Saint Augustine’s boys’ high school in New Orleans.
Calvin, following the lead of his mother, became known for singing well. He pursued the quest of becoming an entertainer and spent time in the city of New York performing as a singer in night clubs and as a master of ceremonies while still maintaining his position in the New York Department of Sanitation security.
After retirement, Calvin returned to New Orleans where he resided until 2005. In that year, the devastation of Hurricane Katrina forced him to evacuate New Orleans and take up residence in Houston Texas. Then in 2020, another civic catastrophe, the corona Virus became his attacker. He spent 4 months in the Zion Memorial health care facility before he was safe to leave.
Calvin was loved by everyone. He was dedicated to the ministry of Adoration at St Alberta of Trapani Catholic Church in Houston Texas. He will be missed by Pastor Fr. Vincent Tran and the many parishioners he served with. He was dear to his nephews and nieces, his grandnieces and grandnephews and the many first cousins whose relationships were very close. He was peaceful and gentle in manner and if God needs a supporter, then Calvin would be the one.
There will be a viewing on 29 December 2020 at 9AM, followed by a 10AM requiem mass at Saint Joseph’s Catholic church located at 807 N Anglin St. Cleburne TX 76031. Calvin will be interred at the Cleburne Rose Hill Cemetery following the Mass.

To order memorial trees or send flowers to the family in memory of Calvin Joseph Toval, please visit our flower store.