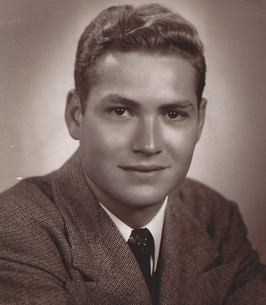 Funeral services for Marshall Coleman Wicker, 93, of Cleburne, Texas will be conducted at 2 p.m. Wednesday, March 11, 2020 in the Rosser Funeral Home Chapel with the Rev. John Glover officiating. Burial will follow in Rosehill Cemetery.
A visitation for family and friends will be held from 1 – 2 p.m. prior to the service.
Marshall passed away peacefully surrounded by his family on Saturday, March 7, 2020.
A devoted husband, patriarch, philanthropist, religious activist and world traveler, Marshall was born September 28, 1926 in Cleburne to Homer and Mary Alice Wicker (née Skiles).
Marshall graduated from Mineral Wells High School in 1943 and entered the Navy, where he served honorably during World War II. Following the war, he attended Texas Christian University, earning a bachelor’s degree in Physics and Mathematics while also participating in the 1947 Texas Relays as a member of the track and field team. While at TCU, he met his wife, Bettye Jo Alexander, and they were married on November 11, 1947.
Marshall was employed as a physicist by Shell Oil Company for 35 years, rising to the level of senior executive. During his tenure with Shell, he traveled extensively with his family before returning to Marwick Farms near Cleburne following his retirement in 1983. Marshall and his wife became enthusiastic world travelers, exploring nearly every continent on the globe including trips to Europe, Africa, Norway, Sweden, China and Syria.
As a religious scholar, Marshall studied at both Southwestern Baptist Theological Seminary in Fort Worth and under the hermeneutics program at Oxford University. He also participated in an archaeological dig in Israel and ministered to small churches in Siberia, China and Mongolia.
In Cleburne, Marshall was an active member of the community, serving as a member and past president of the Rotary Club as well as a Deacon at the First Baptist Church of Cleburne. He acted as the Planning and Zoning Commissioner for Cleburne and was named the 1990 Conservationist Rancher of the Year for Johnson Country. He was also a member of the Society of Exploration Geophysicists and later became a member of the First Baptist Church of Lewisville.
Marshall Wicker was preceded in death by his beloved wife, Bettye Jo; his sister, Mary Beth Kruse; and brother, Homer F. Wicker.
He is survived by his son, Joe Wicker; three daughters, Ann White, Sue Bissell and Jeannie Moore; son-in-law, Russell Moore; six grandchildren and seven great grandchildren.
To order memorial trees or send flowers to the family in memory of Marshall Coleman Wicker, please visit our flower store.