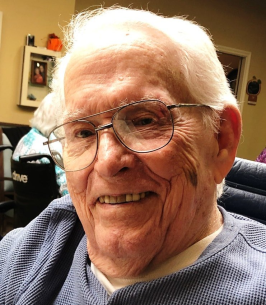 Ronald Thomas Williams was born August 1, 1933, with his twin brother Donald Lee Williams, to Merritt and Loree Williams, in Doole, Texas. His parents were sharecroppers and his father was a carpenter who built churches and houses. Though poor, the family was happy, well-fed and clean clothed. They were raised in the Church of Christ and their faith is still strong.
Ronald and Donald were inseparable; they competed in sports, they double-dated, went to college together, and they joined the army at the same time and requested that they be stationed together. They were best friends and confidants and Donald’s passing left a hole that couldn’t be filled.
Ronald met the love of his life, Linda Gaye Richards, in 1954. They married Nov 10, of the same year. He was tall, she was short. He was from a small town, she from Dallas. It was perfect and they were together until Linda’s death last year, almost 65 years.
Ronald worked in the building industry, He and his brothers had worked alongside their Dad, and he loved working with wood. He made beautiful furniture for his family. When he retired, he and Linda moved to Granbury, Texas.
Ronald loved to fish, to travel with friends, to shop hardware stores. But mostly, Ronald loved to be with his family. He and Linda raised two daughters, Gailya Williams Silhan and husband, Jerry Silhan, and Vicki Williams Moore and husband, Robert Moore; four grandchildren, Jayson Russ, Roland Russ, Troy Silhan and Caitlyn Silhan Henry; and seven great-grandchildren, Addison Russ, Garrett Russ, Mikayla Russ, Bryce Russ, Cameron Silhan, Lily Silhan and Evelyn Ila “Evie” Russ. If he could have seen them every day, it wouldn’t have been enough!
Ronald passed away peacefully on January 14, 2020 at The Cove at Waterview, with Gailya and Vicki at his side. He had outlived Linda Williams by 4-1/2 months to the day and it was as long as he could remain here without her.
Friends are invited to a celebration of his life, which will be held at Granbury Church of Christ, 1905 W. Pearl St., Granbury, Texas 76048 at 10:30 a.m. Saturday, January 18, 2020, followed by a 2:00 p.m. interment at Grove Hill Cemetery 3920 Samuell Blvd, Dallas, Texas 75228.

To order memorial trees or send flowers to the family in memory of Ronald Thomas Williams, please visit our flower store.