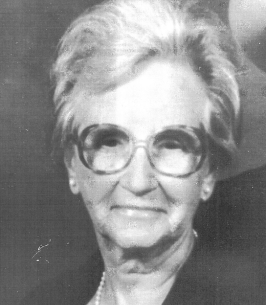 Opal Winnett passed into “Heaven” on “Jesus’ birthday”, December 25, 2020. She was born July 12, 1919 at her family home in Gholson, Texas, to Marion D. Pack and Ada T. (Coleman) Pack from Tennessee.
Opal grew up in Gholson and graduated from West High School where she played on the first girl’s basketball team.
She married Horace Alford Winnett on February 14, 1960 in the Gholson Methodist Church. They lived on a ranch in Blum, Texas and Opal worked in the Blum school library.
They raised daughter Janice and then raised her two sons, Johnny Moore and Billy Crawford after Janice passed away.
Opal was a loving wife and step-mother to Horace’s three daughters. She lived day to day the life she believed in with a gentle and kind heart. Opal cherished the role of homemaker. Some of her favorite times were spent surrounded by loved ones, sewing, cooking, and gardening.
Opal was preceded in death by her parents; husband; daughter, Janice Crawford; and grandson, Johnny Moore.
She is survived by daughters, Jean Moss and Shirley McClure and husband, Don; grandchildren, Gary Moss, Randy Moss, Sherri Hamilton, David McClure, Kelly McNeill, Joel McClure, Evelyn Moore, and Billy Crawford; and numerous nieces and nephews.
The family wishes to thank the staff at Ridgeview Nursing Home in Cleburne for their care and compassion in Opal’s later years and also, to Kelle and David Whitfill for their special care.
Opal was buried in a private graveside beside her mother and dad on Tuesday, December 29, 2020 in the Gholson Cemetery.
In lieu of flowers, memorial donations may be made to your local food bank.
To order memorial trees or send flowers to the family in memory of Opal Dee Winett (Pack), please visit our flower store.