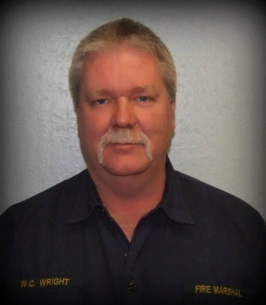 Funeral services for Billy Wright, 55, of Cleburne, Texas will be conducted at 11 a.m. Saturday, November 7, 2020 at the Grandview Church of Christ with Mr. Buddy Fry officiating. Burial will follow in the Grandview Cemetery.
A visitation for family and friends will be held from 6 – 8 p.m. Friday, November 6, 2020 at Rosser Funeral Home.
Serving as honorary pallbearers will be the members of the Cleburne Fire Department and the Cleburne Police Department.
Billy Wright passed away Wednesday, November 4, 2020 at his home. He was born in Fort Worth, Texas on July 9, 1965, the son of Ina Sue (Vann) and William Conrad Wright.
Billy married Sharlette McLaurin on December 29, 2014 in Cleburne. He was a retired Fire Marshal with the Cleburne Fire Department and attended Grandview Church of Christ.
Billy was preceded in death by his parents; and son, Shane Wright.
He is survived by his wife, Sharlette Wright of Cleburne; son, Hoby Wright and wife, Kayla of Grandview; daughter, Harley Wright of Fort Worth; step-son, Benjamin Bain and wife, Alicia of Joshua, Texas; grandchildren, Paisley Shelby of Grandview, Aiden Askew and Brileigh Bain, both of Joshua; brother, Robert Wright of Cleburne; cousin, Kirk Clark of Mason, Tenn.; mother-in-law, Diane Davenport; sister-in-law, Rebecca Jasinski; brother-in-law, Steven Jaskiski; niece, Kayla Jasinski; and nephew, Devon Jasinski, all of Alvin, Texas; and many other family members and friends.

Rosser Funeral Home does not have an onsite florist. To order floral tributes please CALL a local florist for delivery.
To order memorial trees or send flowers to the family in memory of Billy Wright, please visit our flower store.